Learning bird topography off by heart is one of the most useful steps to take towards the sketching and note taking for birds in the field.
Feathers grow in tracts or zones around a birds body and artistically help to give it shape and form. Refer to the introduction in any worthy field guide for examples of topography.

Initially looking at the head concentrate on the feather zones within it but not on individual feathers or fine detail. Draw out each zone as isolated irregular trapezoids, filling in feather patterns and colour notes for each one. This is ideal for use in field ID descriptions. See A.

Constructing the head from these zones will help give the bird a solid and 3 dimensional look, the object of any observational drawing on a 2 dimensional surface... Noting combinations of colour and feather patterns within each feather zone of interest can then become more refined. See B.

Early on the morn of 20th June I was flagged down by the warden on my way into the Cley Marshes Reserve and advised that Little Ringed Plover appeared to be nesting in the main car park. He had been alerted the previous afternoon that adults were about the car park and two eggs had been laid.

Upon inspection this morning two cool eggs were still in a shallow scrape of dried stems but the adults were nowhere to be seen. The species normally lays four eggs before incubation commences so things could develop either way.  Much to his and NWT's credit the warden proceeded to rope off this section of the car park.
By the 22nd four eggs had been laid, an adult was securely sitting on the nest and even more of the parking bays were roped off! Over the next  few weeks public interest grew and grew even to rival that of the Cromer peregrines.

Working on a three week incubation period I made a diary note to check for hatching early morn from the 14th July onwards. On 16th July synchronous hatching duly occurred see above, all four chicks were mobile by midmorning.  A great success story for all involved. 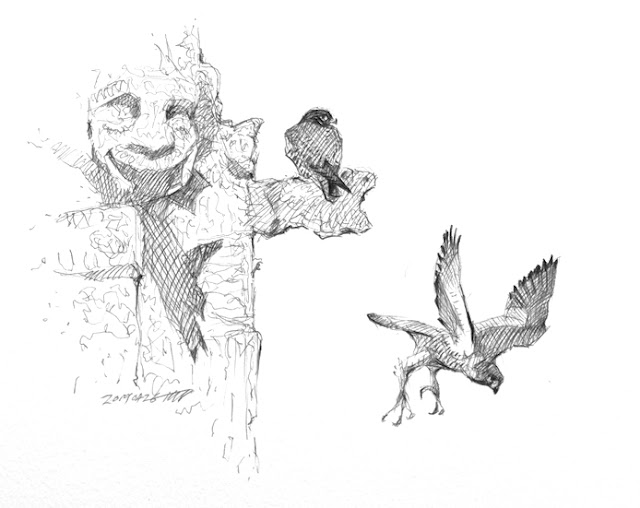 The grand recovery of the Peregrine Falcon in the British Isles over the last few decades is a conservation success story of resilience and adaptability. Its position as supreme apex predator and an 'ecological barometer ' is undisputed. Pairs now set up breeding sites within our major towns and cities on tall manmade structures.


A pair have finally taken to Cromer Church of St Peter and St Paul in the centre of town and three if not four eggs have now been laid. It is well worth a visit as the local bird club have provided the birds with an ideal eyrie scrape, also with cctv watching every event within the box. The monitor to view the live footage is in the church lounge and there is soon to be a WiFi feed for the video. Activity about the eyrie will reach fever pitch when the young hatch but at present the female is peacefully incubating the eggs. Peregrine Falcons frequenting this area of coast line and the Cley Reserve are in the main immature birds but adults are seen on occasions. A large immature bird, probably therefore a female,  has overwintered  and is still present on the Cley Reserve. The Cromer pair are not thought to hunt here as there is no need to fly the 17Kms as prey is plentiful in and around the Cromer territory.


On April 26th the tercel was observed repeatedly still-hunting from the tower, launching after prey over the sea and town. A supreme demonstration of avian hunting skills.


201908 Female 45 has reportedly be seen at the Cley reserve taking prey in August.